The popular oft-debated narrative of Bitcoin (BTC) as a safe haven is being tested yet again, following the U.S. strike in Iran. (Updated at 17:00 UTC: updates in bold). Iranian Major-General Qassem Soleimani, head of the elite Quds Force, and Iraqi militia commander Abu Mahdi al-Muhandis were killed in an air strike on their convoy in Baghdad airport by the U.S. airstrike late on Thursday, reports Reuters. Veteran war-zone correspondent and political analyst Elijah J. Magnier posted a Twitter t... 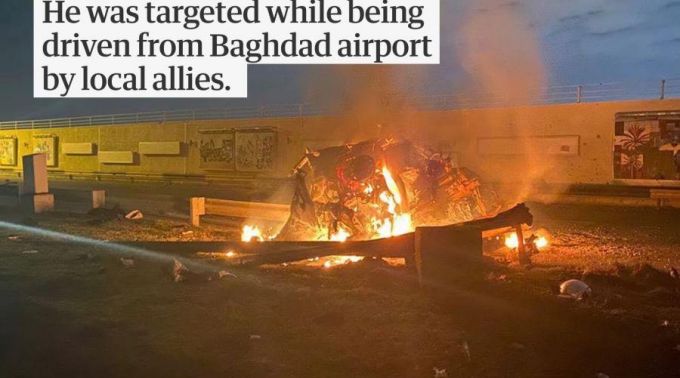 The popular oft-debated narrative of Bitcoin (BTC) as a safe haven is being tested yet again, following the U.S. strike in Iran. (Updated at 17:00 UTC: updates in bold). Iranian Major-General Qassem Soleimani, head of the elite Quds Force, and Iraqi militia commander Abu Mahdi al-Muhandis were killed in an air strike on their convoy in Baghdad airport by the U.S. airstrike late on Thursday, reports Reuters. Veteran war-zone correspondent and political analyst Elijah J. Magnier posted a Twitter t...

The popular oft-debated narrative of Bitcoin (BTC) as a safe haven is being tested yet again, following the U.S. strike in Iran. (Updated at 17:00 UTC: updates in bold).

Iranian Major-General Qassem Soleimani, head of the elite Quds Force, and Iraqi militia commander Abu Mahdi al-Muhandis were killed in an air strike on their convoy in Baghdad airport by the U.S. airstrike late on Thursday, reports Reuters. Veteran war-zone correspondent and political analyst Elijah J. Magnier posted a Twitter thread saying, among other things, that Iran decided to respond to the assassination directly, that the U.S.'s moves are uniting Iraq and Iran against it, that all U.S. high-ranking personal could be potential targets for retaliation, and that Muqtada al-Sadr (an Iraqi Shia cleric, politician and militia leader) has given an order “to indicate his readiness for war against the US in Iraq.” Iranian journalist and activist Masih Alinejad shared, however, that Qassem Soleimani was not a hero for many Iranians, but a warmonger.

The news of the attack has sent numerous waves throughout the geopolitical space and the financial world, reaching the Cryptoworld as well.

The traditional market was swift to react to the news of the airstrike. Bloomberg reported on December 2 that, as tension between the U.S. and Iran escalated, stocks and American equity futures were sinking, while haven assets started rising, including gold, the yen, and treasuries. Gold rallied and West Texas oil jumped as much as 4.4%. The very next day, the media outlet said that gold rose to a four-month high, spot bullion climbed 0.9% to USD 1,542.47 an ounce, silver price increased 1.3%, platinum and palladium advanced, the yen strengthened 0.6% and oil jumped close to USD 70 a barrel.

Interestingly, the air strike coincided with a quick dump and pump in the crypto market, possibly fuelling the discussions on safe havens.

$BTC exhibiting some macro convergence today w/ Oil and Gold on the back of Iran geopolitical escalation https://t.co/QZFQltxLky

Many, like Matthew Graham, CEO of the advisory company Sino Global Capital, wondered if the price was moving as a reaction to the current geopolitical risks. There are those that apparently think that it might be so.

But in the opinion of many online, this doesn’t seem to be the case. “BTC moved higher almost four hours after all other assets,” said trader and economist Alex Krüger, “and before the move some where even discussing how bearish Iran news could be, possibly rationalizing the initial move lower.” Another commenter said that the market change looks “like a major player got liquidity, as many were short and their positions were liquidated.”

The Bitcoin Market Makers just woke up and said "oh shit we gotta pump this if we're going to keep the digital gold narrative alive."

"The case for BTC to rise in the face of Iranian geopolitical strife is certainly understood, however the Iranian market in and of itself is likely too small and slow to have caused this move single-handedly. More likely, one or several players have been waiting on the side for a good buying opportunity below USD 7,000 per coin and it seems one has presented itself," Mati Greenspan, Founder of Quantum Economics, said in its newsletter today.

This is a type of an event that may cause a number of discussions over the world’s most popular cryptocurrency as a safe haven, exasperated by the rising tensions and rampant speculations.

While some, like developer Udi Wertheimer, commented that World War III this month is possible, most people seem to think it unlikely.

Important: The US has not gone to war with Iran.

On the other hand, Krüger finds that the talk of BTC as safe haven and its price appreciating due to the attack in Iran is “absolute nonsense.” "Round numbers are there to get run over, in both directions," he added, "I have a small long so I'll be happy if speculators use the narrative to push prices up."

BREAKING: NO ONE IS GOING TO BUY BITCOIN BECAUSE OF A WAR WITH IRAN OTHER THAN PEOPLE WHO ARE BUYING BITCOIN BECAUS… https://t.co/Nyf4WAeG7z

As previously reported, this is a narrative which has gotten into some trouble before. And though it has been praised as an ‘unlikely sanctuary,’ others have claimed that there is no proof to support that narrative. Spencer Bogart, Blockchain Capital general partner, said recently that, in the long-term, BTC would become a safe haven, as it currently remains at an intermediate stage of its evolution, when risks are taken into consideration, as well as attractive aspects.

Meanwhile, investor Eric Dadoun commented that one shouldn’t celebrate over a bad event being a good opportunity for an investment.

"Bitcoin and its brethren are risk assets, and they would be among the first to get market sold in the event of an uptick in global economic and regulatory uncertainty. That cyclical pain could be exacerbated by further crackdowns on the industry. Even threats of wholesale restrictions on crypto business activity and/or ownership would create existential fear for many current investors," according to Ryan Selkis, CEO of crypto researcher Messari.

Crypto as an ally in Iran

There have already been efforts made in the crypto space that could theoretically enable Iran to evade United States sanctions, as the New York Times reported last year. As Iran’s economy has been staggered by banking sanctions, which also means that companies from other countries can’t do business in Iran, the difficult-to-trace transactions in Bitcoin could allow Iranians to make international payments, the article said.

Also, as reported back in 2018, Iran was looking to dodge the U.S. sanctions via a digital currency, and also that the country allegedly gave the green light to cryptocurrency mining, with more crypto-friendly measures and legislation to follow. Then, in July 2019, we reported that a financial expert said cryptocurrencies are already playing a role in Iran’s fight against economic sanctions, and that the states’ government may turn to miners for additional assistance.